Vanished Splendors: A Memoir by Balthus 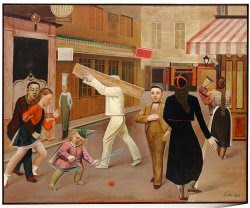 This “as told to” memoir of the painter Balthus leaves one wanting. If we expect some revealing statement as to why he painted such unusual portraits and tableaux, it isn’t here. Those famously unladylike young girls were, he assures us, not intended to have any (or rather, not as much as some would like to read into them) erotic appeal, but were rather created as an expression of transitional adolescent innocence, painted consciously in the manner of the Renaissance masters. Ok, I’m skeptical, but I’ll go along with it for argument’s sake. On a personal level, I must say that I find the artist’s paintings strangely compelling, interesting for their subtle surrealism (which he claims to abhor, but see the weird 1933 composition The Street, painted when he still had some obvious connection to that crowd), their overt creepiness (his portraits of Derain and Miro), and their occasional technical maladroitness (Cat with Mirror III, with the impossibly poor figure of the girl). And yet the paintings and drawings still have an undeniable mastery, particularly in works such as the Passage du Commerce Saint-Andre and The Children. Strangely, while this book contains several pages of photos of the artist, there are no illustrations of his paintings other than the self- portraits on the front and back covers .

Born into the Polish nobility, the painter’s father made the laughably bad decision to sink the family fortune into Russian railroad stock on the eve of the Bolshevik Revolution (ouch!). The financial prospects of young Balthus and his brother were somewhat redeemed by what he refers to as a small legacy from another relative. Balthus spent the 20th century amongst the intellectual nobility of Europe. As a child, his mother played footsie with Rilke, who encouraged his artistic interests (Balthus published a picture “novel” as a child which revolved around the first of many cats who answered - or not, as cats do – to the name of Mitsou), and he casually name-drops the likes of Gide, Artaud, Picasso, Malraux, Fellini, etc. in the course of this memoir. (He also notes that Bono was a visitor to the chalet, although that may overstretch the term “intellectual nobility”.)

The main issues with this memoir are its repetitiveness and apparent coyness. Balthus stresses his indebtedness and kinship with the old masters such as Piero della Francesca and Poussin and his distrust of Breton and the Surrealists. He stresses (rightfully) the significance of his friendships with Rilke, Picasso, and Giacometti. He describes his favorite relaxations of contemplating the canvas with a cigarette and of stretching out in the chateau and letting Mozart’s operas wash over him, resounding through the empty rooms. He emphasizes that he is, as befitting old-school titled nobility, a conservative Catholic. As interesting as these facts may be, they are repeated quite too often, and there is no real depth or revelation to the memoir. There are some madding allusions to situations that call out for explanation : the relationship with his niece Frederique, with whom he lived before the Countess Setsuko came into his life being the most tantalizing bit of coyness. There is also the odd caption that reads “The painter and his daughter, Harumi, understand each other perfectly.” Now what the hell is that supposed to mean? Balthus’s relationship with his brother, the notorious author Pierre Klossowski de Rolla, is passed over quickly, in a chapter of less than a page (he sees his brother’s work as “transgressive”, lacking luminosity). He notes that Klossowski’s work is “a black diamond, while I try to paint starbursts, shuddering wings, and children’s flesh lightly touched by angels.” Okay, then.

I can’t help coming away from this memoir feeling that something has been hidden, that there is some dimension of honesty that is lacking. Whether deliberately, as of an old man whistling past a graveyard, or from some deeper sense of denial, I can’t say. The repetitiveness, if not born of senility, seems to suggest a strategy of “here’s my story, and I’m sticking to it”, and the absence of any reproductions of his paintings suggest that the artist would just as soon not be confronted with them as any sort of evidence to the contrary in terms of the image he is attempting to project. There are some lovely and strange passages, such as Balthus’s jaw-dropping confession that “I’ve never felt a real attraction to horror, ugliness, and oddness” and his wonderfully politically incorrect cultivation of “the aristocratic taste for displeasing”, which he attributes to the 19th century dandies. There are also some passages replete with unctuous piety. In the end, what we get in this book a nice portrait of the outer trappings of a man – the silk kimonos, the hundred-windowed chalet in the Alps, the aristocratic profile – but the inner man seems out of reach.