The Other Side by Alfred Kubin 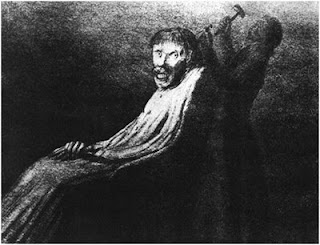 The Other Side, Alfred Kubin's only extended literary work, is a strange and fantastic dystopian nightmare, and a book which would make my list of 100 favorite books, if I were prone to making such lists.

The Central Asian "Dream Kingdom" established by the enigmatic Claus Patera is ruled by manipulation of the subconscious and furnished with the tarnished and threadbare cast-offs of Europe. It is to the capitol of the Dream Kingdom, the city of Perle - a place perpetually oppressed by grey skies - that the narrator is inexplicably summoned. The eccentric inhabitants of Perle live as if under a spell, subject to bizarre hallucinations and ruled by the secluded Patera. To the degree that Patera may be an emanation of Patera’s mind, it is subject to his increasing madness as events in the physical realm reflect the explosive violence of his mental disintegration.

Alfred Kubin was primarily a visual artist. The Penguin Modern Classics edition* includes drawings by Kubin and an autobiographical appendix. Born in 1877 in northern Bohemia, Kubin’s was a morbid personality, given to torturing small creatures in childhood and obsessing over death. He later fell under the thrall of Schopenhauer’s pessimism, which he considered the only reasonable response to life. He “found keen pleasure in dwelling in imagination on catastrophe and the upsurge of primeval forces”, a perspective that informs the cataclysmic climax of his novel. In his collected illustrations, Kubin’s dark and fantastic imaginings are a natural (or unnatural, as the case may be) progression from Redon’s cyclopic, grinning spiders and the sexual fetishism intimated in Rops. Click on David X's blog over there on the right for more about Kubin and his art.

*There is also an edition published by Dedalus (link below), which appears to be out of print.